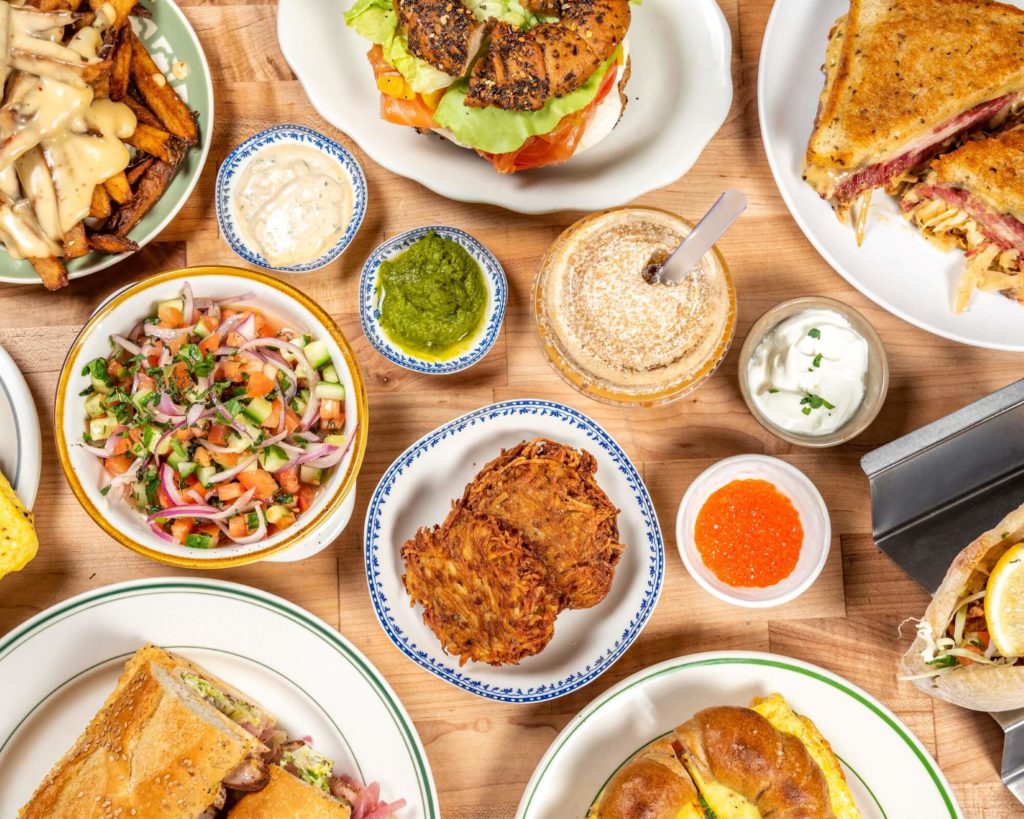 You can read the full version of this article on Opentable

Visiting Edith’s Eatery & Grocery in Brooklyn is like getting a crash course in Jewish history. The Williamsburg grocery, deli, and restaurant stocks Jewish staples, prepared foods, beverages, and treats from all over the diaspora, from New York to the Middle East. Browse the shelves and find a dozen types of mustard and even more varieties of specialty pickles, Persian green raisins sold by weight, jars of tahini and za’atar, specialty potato chips, and a nook teeming with tinned fish varieties that extend way beyond gefilte.

“If it’s part of the diaspora, it has a place here,” says Edith’s owner, Elyssa Heller. “I didn’t want to take everything too seriously. We have artisanal versions, we have cheaper versions, we have a little bit for everyone.”

On Edith’s shelves and all-day menu, Heller curates the diverse flavors that she—and her multigenerational clientele—are accustomed to. Favorites include classics such as celery soda, along with less traditional but beloved gourmet packaged goods, like locally crafted pasta, plus a less-than-kosher cheese and charcuterie section.

“I don’t even consider myself that Jewish,” laughs Heller, standing in Edith’s back section, which doubles as a seating area for the restaurant. Though she’s referring to her religious links, Heller’s cultural connections run deep. After nearly a decade spent working in operations for companies such as Dylan’s Candy Bar and Momofuku, she was ready to kickstart her own project. The pandemic served as the perfect segue for a new culinary venture.

Tempted to bring the twisted Montreal-style bagels she consumed—and loved—as a college student in Canada, Heller joined forces with a local pastry chef, sublet a wood-fired oven from a Greenpoint pizza parlor, and drew long lines for her crusty, still-warm bread.

“I don’t get New York bagels, they’re too much, too doughy,” says Heller, who grew up in the Chicago suburbs. It might be a controversial declaration, but it’s a sentiment that fueled the success of Edith’s pop-up, which led to a walk-up sandwich counter in Williamsburg. It all paved the way for Edith’s Eatery & Grocer, an expansive space on a corner of East Williamsburg, historically populated by Italian American restaurants, which opened in 2022. For Heller, Edith’s reflects a piece of family history: it shares a name with her great aunt, who ran a Jewish deli in Brooklyn in the 1950s.

Edith’s is Heller’s largest venture yet, and she’s blown away by its popularity. Diners from all over the world come for the weekend brunch, where they feast on fluffy Syrniki pancakes topped with tart currant kissel; pastrami steak and eggs; and chicken schnitzel with harissa-honey and spicy serrano relish. Over their meals, they discuss Jewish customs from Croatia, Curacao, London, Paris, and of course, the surrounding neighborhood.

New to Edith’s ever-expanding lineup is a happy hour and dinner menu, plus a covered outdoor dining area. The nighttime selection kicks off with house-made onion rolls or barbari with yogurt, followed by shared plates that pair Brooklyn swagger with Jewish flair. Fritto misto il fungo is made from wild mushrooms with za’atar, plus labneh and herb oil for dipping. Crudo gets an Ashkenazic twist with pickled mackerel, and beef tartare is treated to a Sephardic spin with preserved lemon, apricot, mustard, egg yolk, and lavash crackers.

“There’s no other place like this, it’s approachable and accessible,” Heller confirms, pointing to her shelf of Jewish cookbooks, just steps away from a freezer stocked with bags of pelmeni, locally made pierogies, falafel patties, and Chicago-style pizza. “It’s the smells and the sounds and the experience, you’re in a different place when you’re here,” she adds. She then utters a distinctly Jewish phrase: “Can I feed you?”

An iced tahini oat milk latte (not too sweet, per Heller’s instructions) and an artful platter, laden with a sesame bagel and house-smoked fish, follow. It’s a comforting, hospitable spread that’s both familiar and novel—just like Edith’s itself.