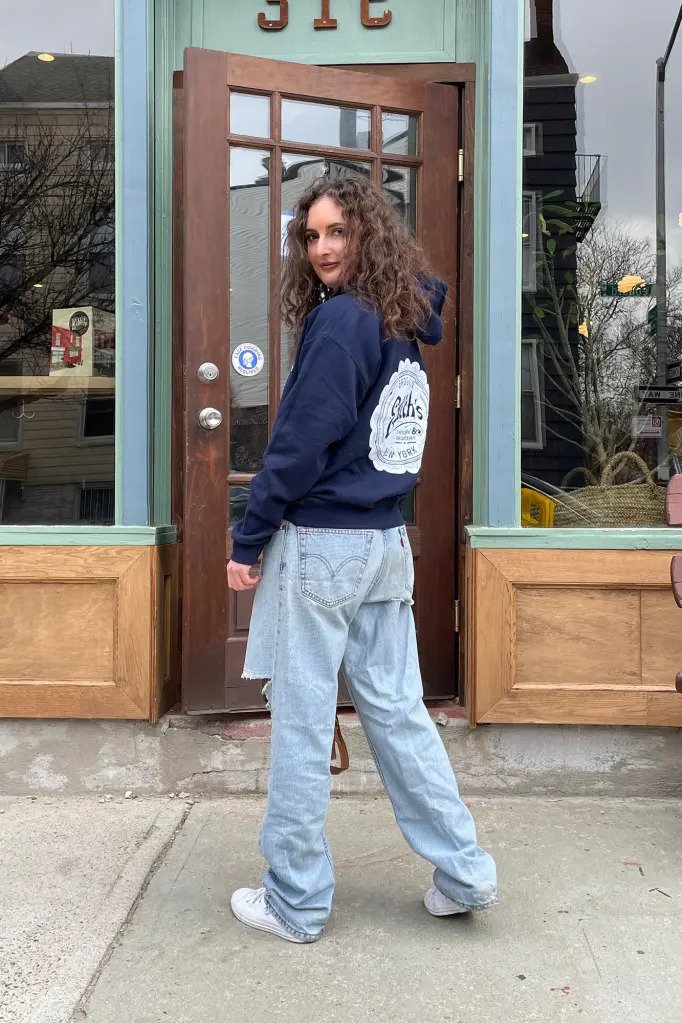 Come for the knishes, pastrami, and bagels, leave with the hats, hoodies and T-shirts.

Beloved delis and appetizing stores — from old favorites like Russ & Daughters on the Lower East to hip newcomers like Edith’s Eatery & Grocery in Williamsburg — are selling chic merch to style-conscious, smoked meat-loving locals. Even big fashion labels are part of the trend, which has been dubbed “delicore.” Earlier this month, Coach and Zabar’s collaborated on a capsule collection featuring a $495 sweater and a $550 leather tote, which has already sold out. The food delivery website Goldbelly, meanwhile, reports that it’s seen a 30% year-over-year increase in sales of the restaurant-related merch it offers, alongside its main business of edible goodies.

Alexis Chernoff, 32, moved from the East Village to Bushwick last month, and she’s already keen to wear her neighborhood pride. She recently shelled out $60 for a hoodie from Edith’s Eatery & Grocery, a sandwich shop that serves Jewish comfort food with modern twists, including a cold brew slushy with tahini that she loves.

“I feel inclined to support my favorite local spots,” said Chernoff, who works in public relations. “Everyone wears the same fashion brands, but wearing your neighborhood spot that only those who know recognize, it feels like you’re in a secret club.”

She estimated that she’s shelled out $200 on delicore apparel so far this year, mixing merch repping Katz’s and Punjabi Grocery + Deli with pieces from Gucci, Isabel Marant and Zara.

“I’ll spend more on merch than I would on the same item at a normal clothing store because it feels more personal and meaningful,” Chernoff said.

In similar fashion, Jake Cohen, author of the cookbook “Jew-ish,” has been rocking a very on-brand $40 gray-green corduroy hat from Gertie, a Williamsburg counter service eatery known for its babkas and smoked meats. The 28-year-old Long Island City resident snagged the cap a month ago and has been wearing it while vacationing on the beach in Cabo, Mexico.

“It’s a fun way to show your fandom in the same way that people wear sports attire,” Cohen said. “I have no opinions or loyalty to sports, but when it comes to delis, I want the world to know my allegiances.”

Celebrities are helping to fuel the trend. In 2020, Jake Gyllenhaal collaborated with Russ & Daughters on a tie-dye salmon-pink T-shirt benefiting relief efforts for the Independent Restaurant Coalition. It sold out, so, last May, Gyllenhaal released a follow-up — a $150 black hoodie bearing the word “LOX” — with proceeds benefitting the Actors Fund.

Meanwhile, actor Pete Davidson, rapper Travis Scott and former New York Giants wide receiver Victor Cruz have both all been photographed wearing hats from Uncle Paulie’s Deli in Los Angeles. Davidson even wore his hat on a date with Kim Kardashian in November.

“It’s not like Balenciaga, or something,” he said. “It’s blue-collar.”

“It’s like band T-shirts — anybody rocks a Metallica band T-shirt, why not rock your favorite f–king deli?” said Uncle Paulie’s Deli co-founder Paul James, who also compares the trend to the passion for Hard Rock Cafe and Planet Hollywood shirts in the ’80s and ’90s. Part of delicore’s appeal, he noted, is that it is relatively accessible.

Back in Brooklyn, merch sales at Anthony & Son Panini Shoppe account for about five percent of revenue, as well as offering free advertising.

Customer JoJo Scarlotta, 23 and a Staten Island native who works in construction, loves supporting the deli and pairing his $35 camo-accented logo hoodie with ripped jeans and sneakers.

“I love their food, I love the people there — I absolutely love everything about it. It’s a lot deeper to me than just wearing the hoodie,” he said.

Mark Kagan, a 38-year-old who works in finance, said that for him wearing a beanie from his favorite cafe — Bright Side in Williamsburg — is a conversation starter.

“I definitely get comments like ‘I love that place’ or ‘I’ve been there,’” Kagan said. “It’s an unspoken language between food fanatics to show their affinity to their favorite food spots.”